Posted on January 28, 2015 by soundtherapymanila 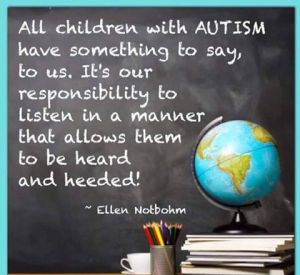 My son W. has been diagnosed with PDD-NOS (within the Autism Spectrum Disorder) at the age of 1 year and 9 months. He has speech delay and poor socialization. He can identify things but would not name them when asked.  He also would not use words to communicate with us whenever he felt  like making a request or calling us.  He also preferred  to play alone and would not consistently respond when called.

My husband and I were shocked when the doctor we consulted for W.  gave him a diagnosis. I started recalling everything to see what went wrong during my pregnancy. My son was a product of a term pregnancy by normal delivery with birth weight of 8lbs. He has been generally healthy, he had mild infectious diarrhea when he was younger and has history of seasonal allergy manifesting as skin rash and rhinitis. His immunizations are all up to date.

We became concerned about his speech when he was more than a year old when we noted that his eye contact was fleeting. We also noted some changes in him.   He would often communicate by pulling our hands to lead to what he wanted. He would also shout or bang his head when frustrated. He is active and would just repeatedly run around the room or run back and forth.

The Developmental Pediatrician recommended us for Occupational Therapy for Sensory Integration & Behaviour Modification twice a week and speech therapy once a week on one-on-one setting. Although imitation, attention and sensory-processing skills have improved, hyperactivity, distractibility, sustained attention and speech still remains to be an issue.

When he was 5, my friends introduce me to AIT (Auditory Integration Training) where a headset was used to retrain my son’s listening  for 10days”.  To our surprise, my son started to use the word “I Want” properly after the AIT program. Before he would always say “ I want water” even he is asking for other things.

We also noticed that he can understand what we are telling him and what we want him to do. He can follow instructions better and he can also self-correct his words like calling names of a person and answering YES or NO question (except with regards to preferences). Other words he said are “Remove shirt please”, Put it in the laundry basket”, “eat your rice”, “drink water”, “open the door”, “sit on the chair” (with prompts).

Even he is still hyperactive, his hyperactivity is much tolerablenow. He also learns fast when taught. We also noticed that he is very good in figuring out puzzles. W.  can do 48 to 96 pieces of puzzle in just 15 minutes, but while he is working on the puzzle, he keeps tapping the board and talking jargon or garbled words in a loud voice.

I was told by my friend to look for a DAN (Defeat Autism Now) Doctor who practices natural medicines. We change our son’s food to GFCF (Gluten Free, Casein Free) diet. The doctor collect my son’s blood, hair and urine and send it to United States to test his allergies and to see how much bacteria, yeast and mercury, etc has to be remove from his body.

This was the time that we realized that we are giving him the wrong diet since he was born. We didn’t realize that he was allergic to milk and that the diarrhea and skin rashes were caused by drinking cow’s milk.

Up to date vaccines are not recommended especially when the baby is sick, right now we only give vaccines which are really important and safe are required to be given to the child. The doctor gave my son natural medicines to detoxify all the heavy metals and bacteria that should be removed from his body because these things can hinder to his progress.

During the process of detoxifying my son shows some regression which was expected to happen as this is a reaction to some of the heavy metals is being pull out from his body.

In addition to his daily activity, we added an ABA (Applied Behavioural Analysis) therapist who visits him 3x a week for 2 hours each session. Also we fill in taekwondo and swimming (should be 3 months after the AIT program) to subsides his hyperactivity and to gain his attentions. He is now studying in a regular school with the supervision of a shadow teacher he is happy and is aware of his surrounding and the people around him.